Digivice is a device and used by DigiDestined.

Each Digivice is connected to its respective Digidestined, with their most basic use being to facilitate the digivolution of the Digidestined's partner Digimon to a more powerful form.

When connected to a Digidestined with a particular Digital Crest, the color will change to a unique combination of two colors when ascending to any form higher than the Champion form. The primary color which composes the body of the Digivice will be the color of the Digidestined in question's crest, such as orange for Tai Kamiya's Crest of Courage. The secondary color - for the device's buttons - seems to be at times random or based on a color that the Digimon has featured in one of its previous forms, such as the blue stripes present on Greymon's body.

In addition to being the primary conduit for channeling the power of a Digidestined into their partner Digimon, the Digivices also appear to have incredible tracking capabilities, being able to detect and trace the locations of other Digivices within the Digital world from several dozen kilometers away. However, in the real world, their tracking abilities are extremely limited, seemingly only able to track such signals from other Digivices from only a few kilometers away at best.

In addition to those capabilities, Digivices used by Tai's Digidestined team were able to channel vast quantities of power to contain such forces as Apocalymon's suicidal attack, which would have been enough to destroy both the real world and the Digital World. 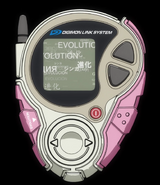 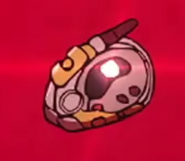